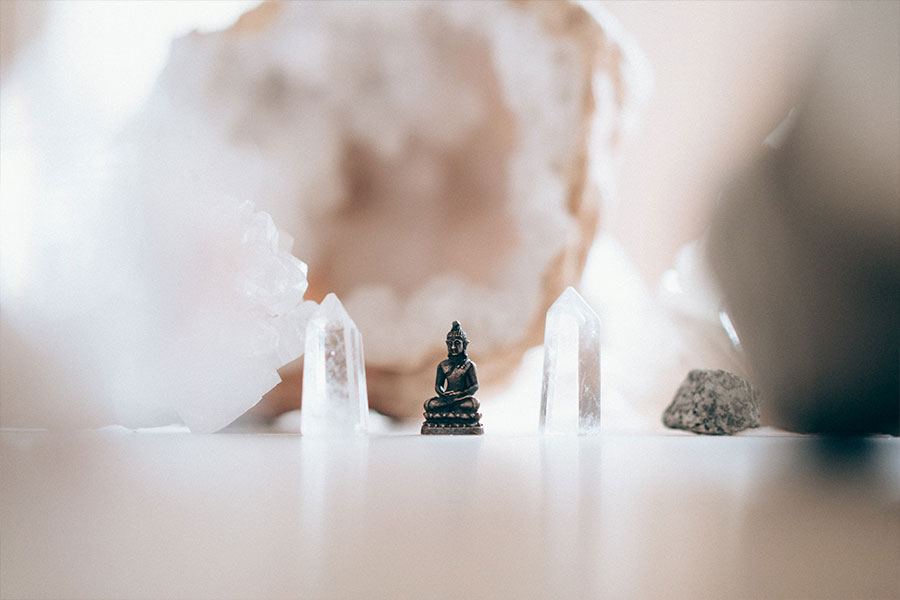 In Japanese, “Rei” means universal, of the spiritual dimension or soul and “Ki” means life force, the energy required for vitality. In totality, Reiki is universal life force energy used as a healing modality and thought to be “refounded” by Dr. Mikao Usui in the 1880s.

A Christian minister in a Buddhist Japan, Dr. Usui taught his students in the traditional methods of healing the spirit. One day, his students inquired about the text in the Bible which states that teachings also exist on how to heal the body. Dr. Usui was dumbfounded because his students were right. In fact, the Bible makes several references to the many healings that Jesus performed with his hands.

Dr. Usui was inspired and went on a quest to discover the tools and keys to activating the healing energy that the Bible talked about. His journey eventually led him to Tibetan sutras which also discussed a form of energy that heals the body. However, Dr. Usui still lacked the ability to activate this energy. He consulted with some Tibetan monks who instructed him to go on a 21-day fast to discover the keys to activation.

Dr. Usui went on this fast atop Mount Kuri Yama where on the final day of his fast he was enlightened with the keys to activating the universal life force energy. The keys were revealed to him in the form of ancient symbols which hold the power to “attune” one to accept and give the healing powers of universal life force. Dr. Usui passed on these symbols and teachings to sixteen others prior to his transition from this life in 1893. He asked Dr. Chujiro Hayashi to preserve and pass on his teachings. Dr. Hayashi spent his life practicing Reiki and in 1938 taught a woman who brought Reiki to the United States, Mrs. Hawayo Takata.

The Reiki symbols are now used in Reiki classes to “attune” or initiate students as part of the ceremonial process of passing on the lessons from Reiki Master to student. Reiki is taught in three degrees or lessons which may take each individual student a varying amount of time. Reiki is not to be taught in a general classroom format for this reason. Each student must be taught Reiki based on their experiences. The Reiki Master must effectively direct the student to the Reiki experience. Reiki is not taught as an absolute, but as something to be witnessed by the student individually.

Reiki Degree One will take a student at least one month to complete, as learning Reiki is a process. Reiki Degree Two can take a student at least a year to master. A Reiki student must master the first two degrees of Reiki before asking for the third degree initiation. Third degree Reiki is the level of the Master and is only taught to those who intend to teach Reiki and live the principles of Reiki.

Reiki is closely related to other self-help techniques like Qi Gong and Tai Chi, or Traditional Chinese Medicine (acupuncture and herbal medicine). Qi in Chinese or Ki in Japanese refers to the life force which exists in all living things. In Chinese culture, it is thought that everyone is born with Qi. Also it is thought that Qi must be fed because when the body is low, it becomes tired and prone to illness. When Qi is charged like a battery in the body, the person is more active and functional without fatigue. When a person no longer manifests Qi, the person dies. It is thought that one can gain Qi from food, meditation, and breathing exercises taught in Tai Chi or the martial arts (Chu 2004), as well as acupuncture and herbal medicine.

Reiki can also be compared to the Therapeutic Touch and healing touch methods that over 30,000 nurses are estimated to utilize in their practice of care (Wardell & Mentgen 1999, Engbretson & Wardell 2002). Many studies exist on the efficacy of touch in reducing anxiety and pain (Heidt 1981, Quinn 1984, Keller & Bzdek 1986, Kramer 1990, Weinrich & Weinrich 1990, Ferrell-Torry & Glick 1993, Quinn & Streklkauskas 1993, Simington & Laing 1993, Barrington 1994, Gagne and Toye 1994, Silva 1996, Olson et al. 1997). Reiki is applied through the practitioner’s hands to the patient and usually involves, but does not require, touch. In Reiki Degree Two, students learn how to apply Reiki from a distance; however, most practitioners offer hands-on treatments.

Lineage is important in Reiki, especially if one wants to learn the Traditional Usui Method. There are many practitioners who believe they have been taught Reiki who have actually never received an attunement or learned a Reiki symbol. After a severe birth injury left my first-born son seriously brain damaged, I looked into all types of healing modalities. When I learned of Reiki, I asked a professional researcher to help me find a Master of Traditional Usui Method Reiki. The original Master, Dr. Mikao Usui, trained only one Master, Chujiro Hayashi, who then trained Mrs. Hawayo Takato with the intention that she would bring Reiki to the US. The researcher concluded that the only Master still teaching with a direct lineage, is named Rev. Betty Lou Pierce, and that is all the information I was given. Two years went by when our family decided to move to Mobile, AL. I had not done any more research to seek out this Master, as I was overwhelmed with caring for my son and all his needs. My extended family thought our moving plans to be a strange change for us, as we had so many services already set up in CA. I felt a strong pull to go, despite logical protests from family. The first day I arrived, I was met by a woman who claimed to know who I was. She said, “You are Julie, and you are a Reiki Master. Have you ever heard of Reiki or the name Betty Lou Pierce?” I was dumbfounded, because of course I knew of Reiki and the name! She said that she and Betty Lou knew that I was coming to Mobile; they were waiting for me; and I was to pass on the lineage. I was taught Reiki One and Two in early 1998 by Reiki Master Ashley Basile, who was taught by Grand Master Rev. Betty Lou Pierce. Betty Lou was taught by Viginia Samdahl, who was taught by Mrs. Hawayo Takata the original Master to bring Reiki to the US. In Hawayo Takata’s retirement letter of 1977, she stated that she taught 3 masters to carry on the lineage: John Gray, Virginia Samdahl, and Ethel Lombardi. I learned the Master degree of Reiki by the same Master in early 2000 after witnessing the effects of first and second degree Reiki in my own life.

As a Reiki Master myself, Reiki has proved its benefits to me and to my patients over the last fifteen years. The medical conditions that I have treated with Reiki began with helping my son to manage the effects of spastic quadriplegic Cerebral Palsy, a complicated neuromuscular developmental impairment due to the severe brain injury that he suffered during birth. Reiki has helped me to help my son remain healthy despite numerous complications that could have consumed him. Many of my son’s friends that have similar conditions have had many more problems related to constant illness. Not only did the energy help balance aspects of his medical condition, but also helped to guide me toward other appropriate treatments and modalities for him.

A dramatic point for us was during a funeral for my son’s best friend. The mother of the child that passed on came up to me before placing her daughter in the ground with a stream of tears and stammered out that she must tell me something. I had previously offered the mother classes for no charge and she had turned my offer down because she wouldn’t accept the donation and couldn’t afford to pay me. She told me that she was aching because she knew that her daughter would be alive if she had accepted the Reiki and done what I had done for my son. This was a significant and heart-wrenching experience for both of us.

While I began with treating my family, it became apparent to me that others were desperately seeking Reiki. Reiki became a business for me due to my patient’s demands to pay me for service and requests for repeated visits.   Some conditions that I have treated with Reiki since my attunements include: migraine and headaches, cancer pain and other various forms of pain, back and nerve problems, epilepsy, broken bones, arthritis, tendonitis, high blood pressure and hypertension, anxiety and nervous issues. Other psycho-emotional issues that I have treated with Reiki include depression and bipolar disorder, obsessive-compulsive personality disorder, quitting deleterious habits and weight-loss.

Practicing Reiki is quite rewarding and greatly improves the practitioner’s confidence when witnessing effect on the patient. And, while other modalities may drain the practitioner of energy, Reiki by definition is universal life force energy that fills the practitioner with energy prior to filling the patient. The practitioner receives treatment while giving treatment, making healing a process that everyone can benefit from. In fact, one study concluded that both givers and receivers experienced an increase in positive emotional state and well-being (Reece et al. 2005) and another stated that 75% of those giving Reiki in their study felt more peaceful and relaxed (Whelan & Wishnia 2003).

Teaching Reiki brings a wider base to the population of people who can benefit from treatment. Reiki is mostly taught on a personal level; in the home, workplace, schools, or even the internet as long as it is taught on an individual basis. Reiki can also be taught to children, making healing and health a family priority to grow up with. As a Reiki Master, I recommend that everyone of this planet learn up to Reiki Level Two, as a self-help and interactive healing tool for themselves, others and the environment as a whole.

Reiki Level Two teaches the symbols used to activate 100% Reiki power, to heal the emotional state of a person, and to perform treatments from a distance. Many Level Two practitioners around the world send Reiki to loved ones or those that need it on a daily basis. There is a silent consensus among Reiki practitioners and teachers that the more people that are initiated to Reiki, the more peaceful and healthful experiences are for everyone on earth.